The following paragraphs describe combat resolution for unit against unit combat in tactical turns. Siege engine deployment uses more or less the same rules. Raid resolution (during strategic turns) on the other hand has an entirely different resolution mechanism.

All units have multiple steps and therefore can take a specific number of hits. When all steps of a unit are lost, the unit is eliminated and removed from play. As long as a unit still has steps, it will fight at full strength. Steps cannot be recovered unless by magic.

The combat system has the following phases:

All combat resolution with weapons (ranged, melee attack and melee defend) are based on a single modified D6 die role. Thus, the result of this die role is based on:

To give the combat result, all three are added.

The result of the role determines the number of hits taken by the attacked unit:

Each unit in the game is represented by a counter that looks like: 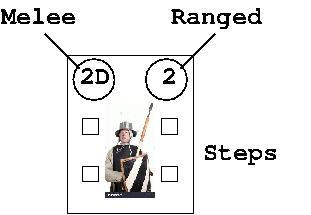 The above unit is a typical example of an Urr Wall militia unit. The background color of each counter indicates the affiliation of the counter. Special units that are used for raids or that use magic in combat have stars for their ranged and melee scores.

A unit consisting of humans, elves or undead typically has 100 men. A Dwarven/Gnomish unit usually counts 70 men to offset the fact that they are hardier and stronger then most men. Moreover Dwarvish/Gnomish units always have good weapons and armour.

The following table gives an idea of the typical units in units against units combat:

Not all weapons and not all armour are of the same quality.

Good weapons give a +1 attack modifier. Good armour worn by a defending unit gives an additional step. Good melee weapons and good armour can be bought from the Redbeards and from the Longbeards. Excellent weapons even give a +2 attack modifier while excellent armour worn by a defending unit gives two extra steps. The secret of crafting excellent weapons and armour is only known by the Longbeards. Whether they are willing to sell excellent melee weapons and excellent armour, must be negotiated.

These additional weapon and armour modifiers will be indicated by special +1 and +2 markers.

The effect of walls and siege engine resolution

Walls can be damaged by:

Like for a normal combat, a D6 die roll is cast to which modifier and base score are added, resulting in a combat result. Since a stone typically hammers at one particular section in the wall, any total result of 3 or higher gives a wall section hit. This hit is then taken by crossing it off on the appropriate wall section box. Wall sections must be reduced from top to bottom, so evenly from higher strength level to lower. Sapping works completely differently and is discussed elsewhere.

A strength level of 1 for a wall can no longer be reduced. A wall of strength 1 indicates that there are wide enough holes in the wall that will allow a unit to pass through them (but only one per combat round) but some/most parts of it are still standing. There will also be a lot of debris in these holes. Units will have to walk carefully through these holes and and they will also be vulnerable while walking through them.

We have a wall section which is damaged to level two. On the wall we have a defending Wall militia unit and a normal melee unit. This section is attacked by three melee units and an archer unit. They will fight for three combat rounds.

The three melee units of the dark prince have a score of 4 with a wall modifier of -2. The results:

The results of three rounds of combat in a table.

In the above table, you should read the numbers in the H column as remaining steps, R as the modifier + die roll and R as final result/afflicted hits. For instance: the unit M2 threw a 4 in the last round and did one hit damage. With a role of 3 or lower no damage would have been done and the defender would have survived the attack, albeit with only one melee unit on its last feet.

Other uses for trebuchets

Instead of shooting at the wall, trebuchets can also be used to vault stuff over the wall. Doing this also initiates a Tactical Turn. It works best if done as part of a broader attack.