The Freedom of Urr

Urr is a wondrous and vibrant place, founded some 400 years ago by merchants from Yendor at a joining of rivers, carving through fertile valleys: 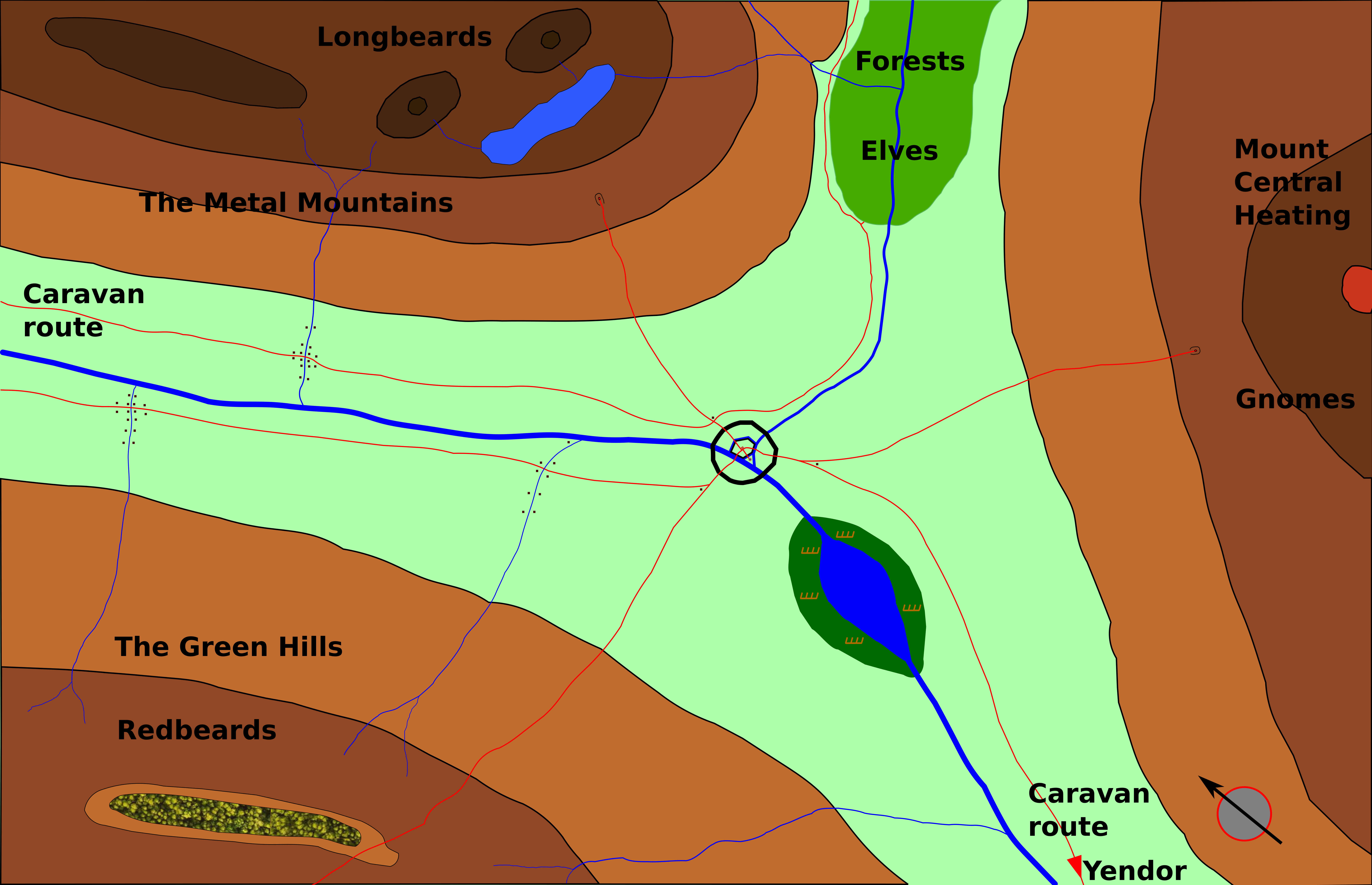 Because of its location, it is at a natural cross roads of caravan routes. Over the years, the city has become wealthy. Originally, the population of Urr were only humans, who decided that Urr should be a Democratic Republic.

Three Dwarven races, however, lived on (or rather in) nearby mountains and hills. They call themselves the Longbeards, Redbeards and Gnomes.

The Longbeards are a noble branch of Dwarves, characterized by their somewhat longer length (for a Dwarf) and usually long beards. They make the finest weaponry and armour. They also mine mithril and emeralds under their mountains, which they trade a lot. They have some resentment against the City, though, because of its tolls.

The Redbeards are a laborious people and usually have a normal length and usually red beards. They also make good weaponry and armour. Some of the Redbeards have even migrated into the soutwest part of the city and earn their living as masons, smiths and craftsmen. In particular, the Master Mason of the city is a Redbeard.

The Gnomes are a particular subspecies of Dwarves, characterized by their short length, big noses and (very) inquisitive nature. They make marvelous designs which are engineering wonders, but sometimes a bit unpractical. The southern slopes of their mountain (known as Mount Central Heating) have very good vineyards.

Several nomadic tribes, who call themselves the Free Folk also live in the valleys. One of their favourite pastimes is the raiding of other tribes and small farms: there is some reason why other people do not like them. Usually, people call them Orcs. Some of the Free Folk have settled in the (somewhat poorer) eastern quarter, doing work that is sordid like the maintenance of the city sewers. The Master of Public Works of Urr is one of the Free Folk.

In the north eastern valley, there are several deep woods, where the Elven king rules. The Elves like to be left untroubled by others. Nonetheless, one or two are always in the city, as the Elven king likes to be informed about Urr and its merchandise.

The wellfare of the City and Vales of Urr has also reached the ears of the Dark Emperor, who has decided that Urr should become part of the Empire. He has granted his son, the Dark Prince, heir apparent to the throne of Darkness, a part of the treasury to acquire mercenaries, equipment, supplies, etc. to mount a campaign against Urr and conquer it. Moreover, he has added a team of experts, some of which are magic users, to support the Dark Prince. Words of this coming invasion has not yet reached the city.

So the stage is set for a clash between Urr, its potential allies and the Dark Empire and its potential allies. This clash will soon become a siege in a D & D like fantasy setting, where both sides may (and will) use magic and both sides will try to get the other peoples in the vales and mountains at their side.

Players can choose which particular people they want to be part of and may also choose to have a Military, Magic and/or Council role. Of course we will also need people for the Control Team. The following player teams will be formed: